curator
Washington, United States
loves: you win if you guessed "pets" and "museums". Also books, art history, travel, British punk, Korean kimchi, bindis, martinis, and other things TBD. I will always make it very clear if a post is sponsored in any way. Drop me a line at thepetmuseum AT gmail.com ! 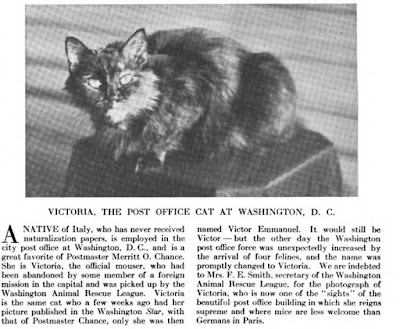 Washington D.C., 1919:  a young Italian strikes a blow for equality as a single mother and immigrant in the employ of the US Postal Service.  Victor Emmanuel, a tortoiseshell left behind by a foreign official, was adopted by the city post office as a staff mouser, only to surprise her employer with the value-added gift of four kittens and a fast rethink on gender.

Get our RSS here